Tensions between the Royal soldiers that protected the customs house and the locals had been increasing since the troops had been dispatched to Boston two years earlier. Paul Revere's Depiction of the Event As the fury of the crowd mounted, a young man hurled an insult at the sentry on duty. The sentry responded by smashing his tormentor's head with his rifle butt.

Eyewitness accounts of the Boston Massacre In the weeks following the shooting of five people in King Street on March 5thmore than 90 people from all ranks of colonial society gave depositions about what they had seen.

Later that year, townspeople made up the bulk of the witness lists for both the prosecution and defence during the trials of Captain Preston and the other soldiers. Below is a selection of these eyewitness accounts of the Boston Massacre, as reported to the trial hearing: I then saw a party of soldiers loading their muskets about the Custom-house door, after which they all shouldered. 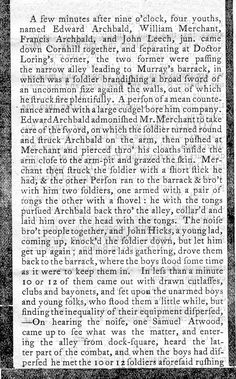 The soldiers fired as fast as they could one after another. Gray, after struggling, turned himself right round upon his heel and fell dead. Soon after, he perceived a number of soldiers coming down towards the sentinel, with their arms in a horizontal posture and their bayonets fixed… The people before the Custom-house drew up before the door, the people who still remained in the street and about the soldiers continued calling out to them to fire.

About four or five minutes after they were posted, the snowballs now and them coming towards the soldiers, the Captain commanded them to fire. At this time I was between the soldiers and the mob, parleying with and endeavouring all in my power to persuade them to retire peaceably, but to no purpose.

They [the civilians] advanced to the points of the bayonets, struck some of them and even the muzzles of the pieces, and seemed to be endeavouring to close with the soldiers. On which some well behaved persons asked me if the guns were charged.

They then asked me if I intended to order the men to fire. 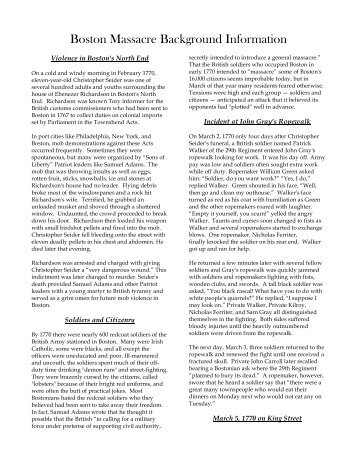 As soon as the snow balls were thrown, and a club, a soldier fired. I heard the club strike upon the Gun and the corner man next the lane said fire and immediately fired. This was the first gun. I am so sure that I thought it was he that spoke.

That next gun fired and so they fired through pretty quick. Came to the Chapel. Was told there was no fire but something better, there was going to be a fight. Some had buckets and bags and some clubs. I went to the west end of the Town House where [there] were a number of people.

I saw some soldiers coming out of the guard house with their guns and running down one after another to the Custom house. Saw the soldiers planted by the Custom house two deep. I saw Captain Preston out from behind the Soldiers. In the front at the right. He spoke to some people. The Captain stood between the soldiers and gutter, about two yards from the gutter.

I saw two or three strike with sticks on the guns. I was going off to the west of the soldiers and heard the guns fire and saw the dead carried off. Soon after, the guard drums beat to arms. The people, whilst striking on the guns cried fire, damn you, fire.

I have heard no orders given to fire, only the people in general cried fire. I was looking at him. Did not hear any order. I think I should have heard him. I now believe it.Anonymous Account of the Boston Massacre, This party in proceeding from Exchange lane into King street, must pass the sentry posted at the westerly corner of the Custom House, which butts on that lane and fronts on that street.

The Boston Massacre , The British Perspective

This lesson is focused on the Boston Massacre. It will be taught in a sixth grade classroom in the American Revolution unit. It will be an opportunity for students to look at a historical event from multiple perspectives using corroborating evidence. The Boston Massacre, known as the Incident on King Street by the British, was a confrontation on March 5, , in which British Army soldiers shot and killed five people while under harassment by locals.

He participated in writing A Short Narrative of the Horrid Massacre in Boston, a decidedly slanted, anti-British account of the events of March 5.

The goal of the publication was to refute charges that Bostonians were the aggressors in the incident and to build up public pressure against the British military. Anonymous Account of the Boston Massacre. A Short Narrative of the Horrid Massacre in Boston. Printed by Order of the Town of Boston.